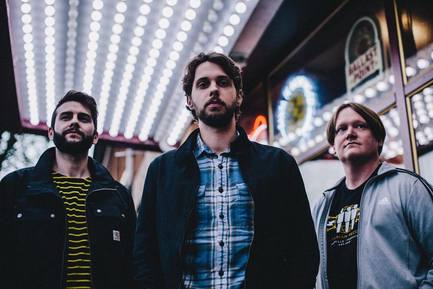 Chill Russell is an alternative rock band based out of Austin, Texas that combines musical elements such as psychedelia, experimentation, and pop to create a unique sound that is both distinct and accessible.
​
The band started in the summer of 2015 as a recording project among friends. These recordings would become their debut self-titled EP, and Chill Russell began playing live shows in February 2016. The band consists of Chase Matkin (guitar, vocals), Daniel Ducloux (bass, vocals) and Patrick Barrow (drums, vocals). Their sound is a unique combination of musical tastes ranging from the pop harmonies of the Beatles and Beach Boys, to the post-grunge alternative rock of the ’90s. The band’s influences span from a range of genres, but each member’s adaption acquires their own brand of rock and roll from The Strokes and Modest Mouse, to Pink Floyd and The Rolling Stones. OVRLD referred to the band’s sound as having a “laid-back beach flare with a side of psychedelics, as if Brian Wilson himself had taken Pet Sounds and added some mescaline for a very chilled beach side hang.”

Building their experience off Austin’s Red River music scene, these hard working musicians are determined to rock you to your core with their harmonizing vocal edge and bluesy guitar riffs. With such accolades as being official South By Southwest artists in 2017, official MR Fest artists, along with being nominees and finalists for the Austin Chronicle’s best band, best new band, best album and best song of 2017, Chill Russell is destined for great things.

The band released their sophomore EP (“…And Yet We’re Captivated”) in November 2016 which emergingindiebands.com said “leaves a faint whiff of cannabis resin floating in the air in a sound wrapped in ’60s retro-rock with a delivery that resonates of the warmth of analogue recording.” Keep your ear to ground as Chill Russell continues to take their act to a national audience and prepares their debut full-length.